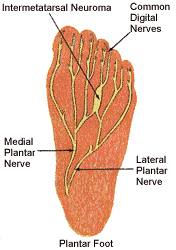 Neuromas are nerve irritations that involve typically an enlarged or swollen segment of the nerve itself. In some cases, these neuromas can actually resemble a small grape in size and can cause significant discomfort to the patient. The individual with such an affliction will often complain of numbness, tingling, and/or burning sensations, which radiates into or involves two adjacent toes. Sometimes neuromas can be exquisitely painful. Most patients relate having to remove the shoe and rub their feet. In most cases, the neuroma will be located between the third and fourth digits of one foot with burning sensation involving the bottom of the metatarsal fat pad and the two involved toes. A second commonly involved site is between the second and third toes of the foot. The typical neuroma usually does not have redness, heat, swelling, or any apparent range of motion loss. Pressure on the bottom of the foot with manipulation of the involved digits will frequently produce the painful symptoms. Neuromas, generally speaking, do not go away on their own but usually require some form of professional care.

The most frequently agreed upon cause of neuromas is that of trauma or injury. This trauma might be the acute kind like a twisting of the foot or stepping on something or it might be the chronic kind like repeated micro-trauma from an excessively flat foot. The problem however, is that the onset of the neuroma pain might not appear for quite some time after the noted trauma. In other words, an injury to the foot may have occurred some two or more months prior to any neuroma formation but nevertheless, a cause and effect relationship still exists. Shoes might aggravate an existing neuroma but usually do not play a causative role.

How do you treat them?

The usual range of conservative care through surgical procedures applies in the approach to neuroma care. Appropriate shoe selection and modifications is a good start in trying to relieve pressure and allow additional room for the foot during walking. Various forms of physical therapy and localized injections of anti-inflammatory medication can frequently be helpful in the treatment of this annoying problem. Surgical procedures armed at identifying and removing the involved section of irritated nerve can provide a more permanent resolution in many cases. A few new treatments have been used over the past few years. The first is a series of neurolytic injections where an alcohol is injected into the nerve to try to destroy it this has not been very successful. The second is a surgical approach to try to release the ligament over the neuromal. This also has had limited success. A discussion of possible recurrence rates, disability involvement, and procedural expectations should take place between the patient and foot specialist prior to surgery.